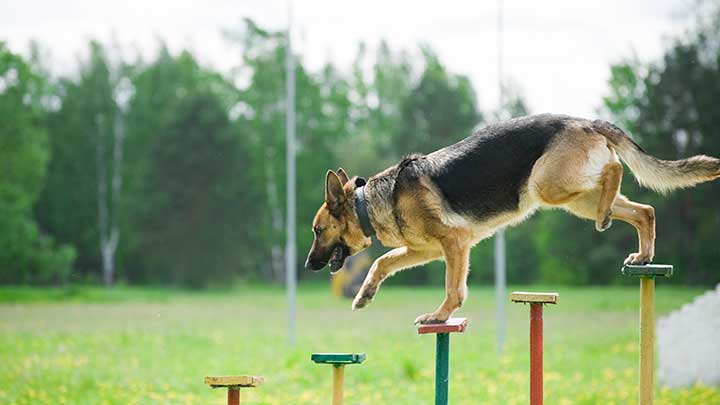 All professional sports have found ways to measure or quantify the athleticism of prospects.

Take the NFL for example. In their combine, each player has to:

What this comes down to, is they are measuring speed, strength, and agility.

Let’s take a look at what we found.

Which breed is the fastest?

Most people wouldn’t hesitate to name the Greyhound as the fastest dog in the world. Often called the 40 mph couch potato, this breed has been clocked in topping out at 43 mph.

Most people could be wrong…

There’s another canine that roams the continent of Africa, aptly named the African Wild Dog, that has been seen to hit speeds as high as 44 mph.

Which dog breed is the strongest?

If we were talking about strongest dog bite, this would be easy. It’s the Kangal.

But we want to talk about strength beyond the bite. And for that we need to look to the bravest dog in history: Balto.

Balto was a Siberian Husky and the lead dog for the famous 1925 serum run to Nome.

And if you believe Jack London, these dogs could pull up to 1,000 lbs.

Which dog breed is the most agile?

Each year there agility championships are held by multiple organizations. We chose to focus on two:

We combined all the results for the dogs above the 20 inch height category and plotted them on a graph.

(Note: We had to draw the line somewhere, and while dogs like Papillon or Toy Fox Terrier can be agile, they would fall short in the strength category, and our goal is to find the most athletic dog breeds, not only the most agile)

From the AKC we have the Border Collie stealing the show, with the Golden Retriever a distant 2nd, Vizsla and All American Dog tied for 3rd, while several other breeds vie for the remaining spots.

In case the image above is hard to read, here’s a recap of the most top 10 finishes in the AKC:

The USDAA lifetime points shows a similar story, with a few added breeds. Check it out:

Again, the Border Collie is far and away the winner in terms of lifetime points.

However, 2nd place is the Australian Shepherd, followed by the Belgian Tevuren and American Foxhound fighting for 3rd. The Golden Retriever is a distant 6th.

And a quick recap of the above chart:

What if you want a smaller athletic dog breed?

As we mentioned above, some of the smaller dog breeds can be extremely agile and quick, but lack in the strength department. So, for the purposes of the above data we left them off the list.

However, because small dogs are just as awesome, we wanted to provide a list of several small breeds that are very athletic. Here they are, in order of (typical) size:

One more breed worthy of mention

Combined with the New Guinea Singing dog, these two breeds are probably the rarest in America, if not the world.

In terms of athleticism take a look at the picture below. They’re both puppies around four to six months old, but notice the agility of the Carolina dog relative to the German Shepherd.

In a split second the Carolina dog has already maneuvered to evade on incoming playful attack before the German Shepherd can even blink.

I personally have owned two Carolina dogs in my lifetime and they are not for the faint of heart.

Simply looking at speed, strength, and agility it looks like the African Wild Dog, Kangal, and Border Collie win out.

But there’s still more to athleticism than those three metrics. What about the mind of the dog? The temperament? These things matter.

There’s also the consideration of which dog is a good fit for you personally.

We believe any dog in the above lists will meet the needs of someone looking for an athletic breed.