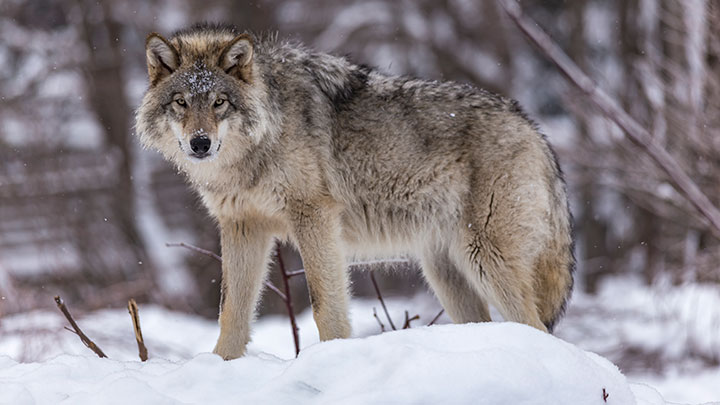 Wolves are the largest member of the dog family.

Many believe that due to myth and folklore, wolves carry a bad reputation and are not the wild and deadly beasts that they are made out to be. When wolves are observed in their own elements in the wild, that they display emotions, even affection.

To understand wolves and decide whether or not you would like to own one, it is important to take a look into their world.

Looking back into the family tree of the dog, it is believed that anywhere between 40k to 15k years ago, wolves and dogs separated and differentiated themselves. The many dog breeds that we have today evolved from wolves somewhere between 2k and 1k years ago.

Today, scientists, for the most part, agree that wolves and dogs fall into the canis lupus species. This is mainly because together, they have the ability to create a fertile offspring: the wolf dog.

Before we take a look into what a wolf dog is and is not, let’s examine what differentiates a wolf from a dog. Clearly, they look a bit different from each other. The head of a wolf is much larger, while dogs tend to have wider hips and chests. They do, however, have the same amount of teeth, but very different jaws.

Domesticated dogs have the ability to be trained and will obey commands for rewards. Wolves, on the other hand, even when bribed with food, will not do something if they do not want to.

Wolves interact very differently with humans than dogs do. Dogs look to humans for companionship and tend to view us as family. Wolves, while they are pack animals, do not seek attention from humans and are extremely picky about strangers.

Wolves are pack animals, through and through! They are known to be very social amongst each other and to form true bonds. When it comes to finding their mate, once they are together, it is like they have fallen into monogamy and they stick together through it all. Amongst their pack, wolves tend to keep up with the motto that nobody gets left behind. They look out for each other, and are known to sacrifice themselves for each other or for the pack’s survival.

When it comes to the temperament of a wolf, there isn’t one to be noted. They are still wild animals and have a much larger variation in temperament than domesticated dogs. They can be all over the spectrum, making them a tad risky to own.

What is a wolf dog?

A hybrid, a wolf dog is produced by mating a dog and a wolf. The wolf can be a gray wolf, a red wolf, an Ethiopian wolf, or an eastern wolf.

Because wolves and dogs develop and mature at differing rates, the mental and physical development of wolf dogs are all over the place and tough to predict.

It was documented that the first breeding of a dog and a wolf happened in England around the mid 18th century. In the 1960s, the wolf dog became increasingly more common. Most commonly, the gray wolf is mixed with a German shepherd, an Alaskan malamute, or a Siberian Husky.

Is it legal to own a wolf or wolf dog in the United States?

The wolf dog is a hybrid, and hybrids, according to The Federal Animal Welfare Act, are considered to be a domestic dog. However, most states either prohibit or restrict your ability to own one of these animals.

Red: In these states, wolf dogs are considered to be too dangerous to own and permits are not provided to private citizens.

Green: States differ slightly on the highest percentage of wolf that the wolf dog may possess to be ruled a hybrid. Each state’s wildlife agency should be able to provide the laws that pertain to each state in this regard.

Gray: In these states, a permit is required in most cases if you want to own a wolf dog. In other states, there are certain standards that must be met in regards to the wolf dog’s enclosure. Again, the wildlife agency of each state will have more information about each state’s laws and standards.

How to own a wolf dog

With so many restrictions, especially if you live in a state on the restricted list, you may possibly be able to get around some of the restrictions. One way to combat any eyebrow raises is to breed wolf dogs, while having documentation on their wolf DNA to be able to prove the amount of wolf in the pet.

It is not lawful to keep an injured, lost, or abandoned wolf, wolf dog, or wolf puppy. When these types of animals are found in the wild, they are taken in manyy zoos and wildlife centers.

If you are so captivated by wolves and determined to possibly work with and be around them, you can look into making it a part of your job and lifestyle.

Many wildlife refugees and/or wildlife rehabilitates get the opportunity to work with wolves in zoos, sanctuaries and preserves. In these settings, wolves that are not able to be released back into the wild are kept in a sanctuary that is made to best resemble their normal environment.

Adopting Your Own Wolf

While it may be illegal to adopt a pure wolf, there are wildlife sanctuaries, such as the Wolf Sanctuary of PA, or national parks, such as Yellowstone, that have particular programs in which you can adopt your own wolf. You may not be able to take the animal home, but you will contribute to providing care and food to that wolf. Along with this comes many benefits, including photos and visitation (in a safe manner of course).

Here’s a list of places we know of that you can adopt a wolf:

Even if you are unable to officially own a wolf dog of your own, there are plenty of ways you can enjoy the beauty of wolves in national parks, wildlife preserves, and sanctuaries.

If you are extremely determined, relocating to a state that does not restrict wolf dogs can always be an option. You may be the newest member of their pack!