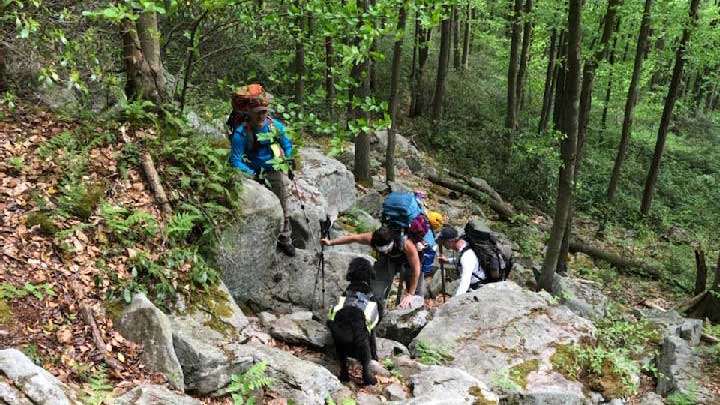 How much experience does your dog need to hike Black Forest Trail?

I hiked with Abby, a seven-year-old, 65-pound Labradoodle who has been on hiking trails literally from 12 weeks old when she attempted a short distance on Sun Fish Pond Trail, part of Tammany Mountain on the borders of New Jersey and Pennsylvania.

Back then, Abby was barely big enough to jump the rock steps on the trail. Today, it takes at least ten miles before she starts to slow down.

Prior to and during Co-VID and shelter in place, her daily routine included 2-mile walks, twice a day, long weekend hikes, preferably with swimming holes, running alongside my bike on Rail Trails and cross-country skiing in the winter.

What to pack for you dog?

Dehydrated salmon, peanut butter packs, endurance snacks and bite size treats are just some of the contents of Abby’s lime green backpack as she is ready to hit Pennsylvania’s Black Forest Trail.

Each morning, her pack was replenished with food for the day; snacks, meals and her own water. Like the rest of the group, she appreciated when we rested, took our packs off, grabbed a snack and just enjoyed the views from the vistas.

There were times that we had four to seven miles between water sources; which meant Abby needed to have water carried also. She learned the word “water” on this trip, as we stopped to pull out her collapsible hydration packs and drink airborne” from the mouthpiece.

Abby counted as my second person and food was packed accordingly. Dehydrated food high in protein, fat and salt is exceptional for such a tough journey, whether a human or dog. It is lightweight and offers everything needed to stay strong, hydrated and healthy on the trail.

Dog food is heavy and doesn’t always get eaten leaving leftovers at camp. Mix the dehydrated food in with the other half of my instant mashed potatoes or left over re-hydrated Backpacker Meals makes for a full belly and good sleeping.

How much planning is needed?

This trip was planned well in advance of any CO-VID lifestyle changes and we stayed on track with our plans. Shelter in place ended the week prior in Lycoming County of Pennsylvania and we were prepared to spend four-days on the trail, self-contained with five other humans and one dog.

This is not your popular tourist trail with its single file steep inclines and 8,300 feet in elevation gain/loss.

The crowds would be minimal if non-existent. Our cluster of six people and one dog was still within federal limits and considered our own family group smaller than the allowed ten.

When is the best time to hike Black Forest Trail with a dog?

Our trip took place at the end of May and Abby completed a new milestone This was her longest hike yet, 53 miles over four days.

How much time should you plan to hike?

By day two, Abby realized running back and forth around the group was a waste of energy and began walking beside me for most of the day.

By day three, the new norm set in and I’m sure she was wondering if this is the way it was going to be.

Day four produces new habits and she, like the rest of us, were glad to reach the end.

As we all dropped our packs at the cars, took off our hiking boots and unloaded excess clothing in preparation of the ride home, Abby took advantage of the comfy spot by the car to grab a quick nap before heading home. It took another day of sleeping to get back on track.

An exceptional trip for all, knowing another trek on the books, pushing everyone’s limit, was completed.